And so time pushes inexorably on towards our opening night next Tuesday.  Yesterday was a rather unbalanced day in that Jeffrey was not due back from Arizona until 4pm, so the rehearsal call was a late one.

In the morning, after breakfast, I ran my customary private rehearsal in the apartment, and was delighted to find that those lines, which I worked so hard at the day before, had by and large stuck in my memory.

With the rehearsal finished I decided to ‘do’ fitness, and got a little carried away.  I went down to the gym on the 4th floor of the building, and completed my running programme successfully and then, mainly thanks to the mirrored walls, thought it would be a good idea to do a series of stomach-crunching sit-ups.  I lay back on the inclined bench, hooked my feet under the roller and forced myself from the recumbent to the upright as many times I could – and then a few more.  That done, into the pool for a series of non-stop 10-length bursts.

Maybe I should take things just a little bit easier in future days, after all a one-man show featuring one man who can’t move or talk is not going to wow the Minneapolis crowds.

Having calmed down for a while I walked to the store and stocked up on a few things, before returning to slump on the settee and eat a salad for lunch.

There was still a few hours to go before the official rehearsal, so I did a little more work on the script before having a shower and generally energising myself again.

Jeffrey had made good time with his flight, and was already in the theatre when I arrived at 4.  We chatted over a few things that had occurred to us both, for example, by entering from the rear of the theatre it suggests that Dickens is coming in from outside – should he, therefore have his top hat and cane with him?  Do we have a hat that will fit over the wig?  What do I do with the items once I get to the stage, as the opening lines of the show are spoken immediately and with great power directly to the audience?  We came to the conclusion that it will be awkward to have them, so assume that he has cast them aside as he came into the hallway downstairs.

The open shirt issue is another discussion point.  Jeffrey has been suggesting for a few days that I play the final scene, in which Charles is rehearsing, with an open-necked shirt, in a rather flamboyant, Byronical way.  I had argued that Dickens was a stickler for his appearance and would be properly attired, but the more I thought about it, the more Jeffrey’s idea made sense.  Dickens was a man of the theatre, and actually I am sure would metaphorically have rolled his sleeves up, and physically divested himself of his cravat to rehearse.  Also the white open shirt matched with the pale linen trousers will create a powerful and familiar image as he portrays Jesus performing miracles preaching on the mount and leading his Disciples.  Finally, it will give me one less thing to fiddle with during the scene 3-4 costume change, which is proving awkward.

We decided between us to look at the open shirt when the costumes arrived and then consult with Dennis for final approval.

And at that moment – the costumes arrived, and so did the furniture for the set. Dennis, Bob and Ben had been at The Guthrie Theatre rental department picking up everything we used two years ago, although there were a few changes.  On the original set we featured a large, circular pouf downstage, but unfortunately this had been re-covered in a very modern fabric so was no good to us anymore.  The replacement, which was the only vaguely suitable piece of furniture there, is smaller, square and features gold fabric and tassels.  It doesn’t look quite right, and we may need to mount a search of Minneapolis for a more appropriate replacement. 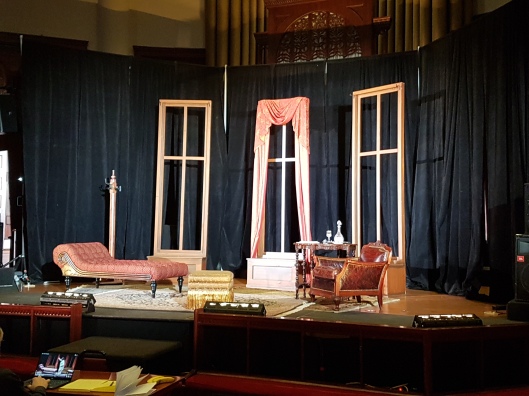 The wonderful leather and oak armchair is back, as is the wooden side table, but a new item on the set is a heavy wooden hat stand, with brass ‘buckets’ to hold walking canes.

In the old show each costume change was carried out in a black out, meaning that the various items could be hidden in storage boxes which had been cleverly built into the large window frames at the back of the set.  With no blackouts available to us at The Wesley, Dickens now has to change ‘naturally’, so the various smoking jackets and waistcoats and cravats have to be on the set.

For almost an hour we worked out how to hang the various coats so that: a) the set looks pleasing to the audience as they arrive, and b) I can reach them easily during the changes.  One annoyingly reflective waistcoat caused the most trouble, but we sorted it out in the end by hanging it between the jacket and the waistcoat of the cranberry-coloured ‘Portsmouth suit’.

As our attention naturally turned to costumes  Bob told us that the linen suit I wore in the opening scenes of the play (and which looked so good), was badly stained, and that he almost didn’t bring it, but a quick inspection of it showed that it was no worse than before, and that the stains didn’t show under the lights anyway.

I tried the suit on and it fitted perfectly (it must have been those sit-ups this morning), and it felt good to be wearing it again.  We then worked through the costume changes one by one, working out where the discarded coats etc should go.

Finally we tried the open shirt look – Dennis liked it, and we agreed to try it in the next rehearsal

All of these practical issues took time, and in the end there were only a few minutes left for Jeffrey to go through his notes from our last run through, and to go over some of the new blocking again.

It is frustrating not to get full runs of the play in but the work we are doing is vital to the overall success of the show, and I am of course doing my own rehearsals each day back in my flat, with my re-arranged furniture.

We had to finish our work at 7.30 because Tricia arrived from the Guthrie to re-introduce me to my wig, which he constructed in 2015 specifically for this show.

Two years ago Tricia had attended almost every performance to fit it and tweak it for me, but this year she is not available, so while she slowly turned me into Charles Dickens she was also demonstrating to Bob and Kasey (who works with Dennis on the PR for the production), who will take on wig duties.  They took copious notes and I tried to feel what was going on at the back of my head, so that I can be of some use to them. 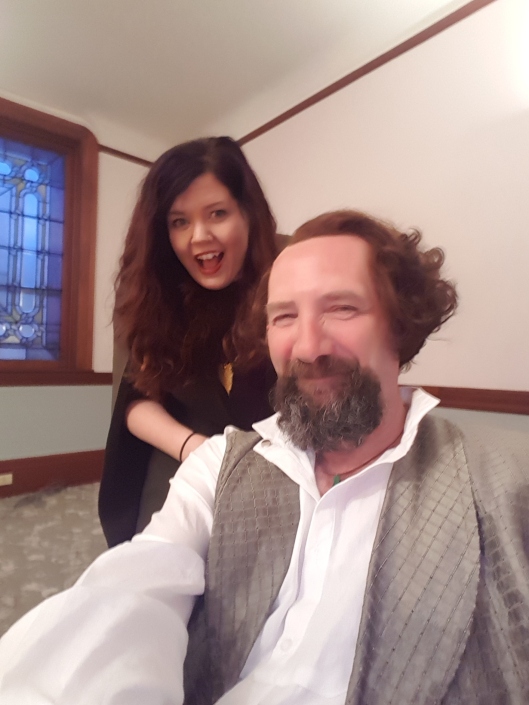 Tricia did a great job on this hairpiece, for she captured Dickens’ wild, unruly, uncontrolled locks and it is not perfect or pretty.  It is the hair of a man who would take his cravat off to rehearse a play.

When Trish finished I looked in the mirror and smiled: welcome back Charles John Huffam Dickens!