After a very positive day’s rehearsing on Sunday, Monday proved to be rather more frustrating, although in the overall creation of our piece of theatre just as important.

The day was given over to our composer Michael, and stage manager to Ben so that we could work hard at the various sound cues through the play, which fall into two categories, the first of which is linking music.  Having watched a few rehearsals to get the tone of the play, Michael has been busy creating some short pieces to fill the breaks between each scene, and we start with the opening of the show.

The music that Michael has come up with slips seamlessly onto a seascape sound, then comes a simple piano melody, joined by cello and an oboe in the background, and one can easily picture the opening credits of a film: the camera is skimming across the sea, over a beach (probably at low tide to create some wonderful reflections and ripples on the wet sand), a grassy cliff sweeps below us and we are in a garden, but the camera still continues over a large fig tree and on towards the handsome house beyond.  In true Hitchockian style we fly through a window (perhaps white linen curtains billowing is a cliché too far), and into a study, where a clock is striking 6. A door is flung open and the unmistakable figure of Charles Dickens storms in.  ‘Disagreeable evening!  Lost and argument with Swinburne over the meaning of Christ and the existence of God.’

All of that from around 30 seconds of music and sound: It is going to be a wonderful opening to the show, and will really bring the audience into Winterbourne House, where Dickens genuinely stayed on the Isle of Wight.

From that major effect we just make our way through the play scene to scene, cue to cue:  do we want a tiny sound as Dickens first sees young Algernon Swinburne on the churchyard wall?  A note, perhaps, or two?  Try this?  No, let’s try something else.  Too loud, let’s make it softer.  Too short, let’s make it longer. 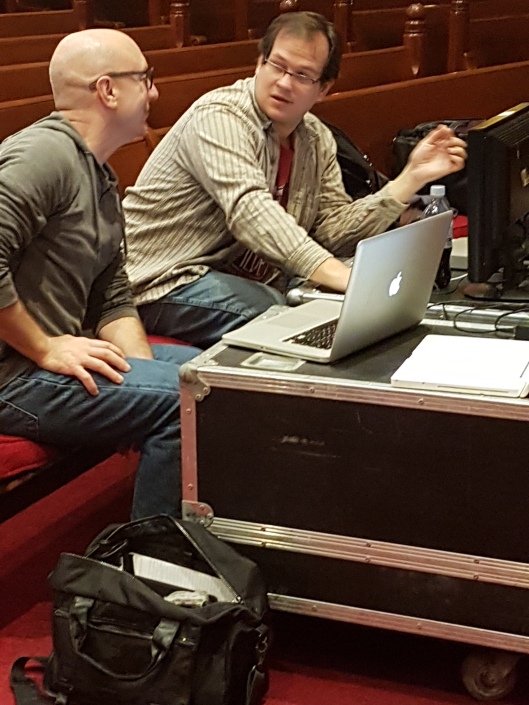 Michael and Ben working the cues

Each stage had to be re-programmed into the computer, then tried out again, before being built into the master programme, which will eventually include lighting cues as well.

And all of this takes time.  Lots of time.  Jeffrey and I sat quietly, passing comment occasionally, and then I am called on to do a few lines.

This went on throughout the day, and there is not a great deal more to say about it really!

As I sat in the auditorium, a few things caught my mind – I  looked up at the magnificent Tiffany glass dome in the roof and reflected that when I look down on the church from my  apartment, there is no dome, just a slate pitched roof.  Curious.

Seat numbers are being put in every pew by Bekah, the manager of the venue.  She is using individual self-adhesive numbers (so seat, say, 42 is two stickers).  We are selling 340 tickets to each show: that is 671 individual numbers, not to mention row letters as well: an awful lot of sticking!  If I thought my day was monotonous, I just need to cast a quick glance into the auditorium!

The one great excitement came after lunch, when Jeffrey produced a new half page of script, which hopefully will clean up the awkward break between scene three and four.  I got to rehearse the scene, with props, a few times and it seemed to work well.  The real test, though, will come during the next complete run-through.

Came 5 o’clock and our time was up.  We had jussssst about reached the end of the play, although there were a couple of effects that Michael was going to take away and work on overnight.

From an actor’s point of view it was a day to display a great deal of patience, and just be there when required.  It was not a day to flounce and have temper tantrums because I was not the centre of attention.  A play such as To Begin With, although a one-man show, is a massive team effort and yesterday’s rehearsals were a vital part of the process.

From the rehearsal I went to shop, buying new trousers as well as food for my supper (a piece of salmon, some wild rice and asparagus), and then walked home.  The weather was everything that you would expect from the first day of spring – sunny and warm with a slight breeze, there was no need to wear a coat and all, which is in stark contrast to my visit here in 2015, when my beard froze as soon as I stepped outside, and thawed again as soon as I got into the warmth.

The amazing thing about the day’s rehearsal, on reflection, is how early in the process we were able to do it. Usually such grinding tech runs come just before the dress rehearsals and everybody gets very tense, nervous and moody.  We still have a week to go, and we are looking in good shape!

This is a short publicity video for the show – share the link far and wide!