Sunday was an important and interesting day for many different reasons, and although actual rehearsal time was severely limited I think that we turned a big corner with the show.

Firstly, the beard.  I mentioned in yesterday’s post that I felt needed to become more Dickens-like and so the first thing I did on getting up was to grab the scissors and razor and start chopping.  I have been cultivating the beard for a couple of months now, so that when the time came it could be quite wild and straggly, as Charles’ would have been during a Summer holiday to the Isle of Wight. 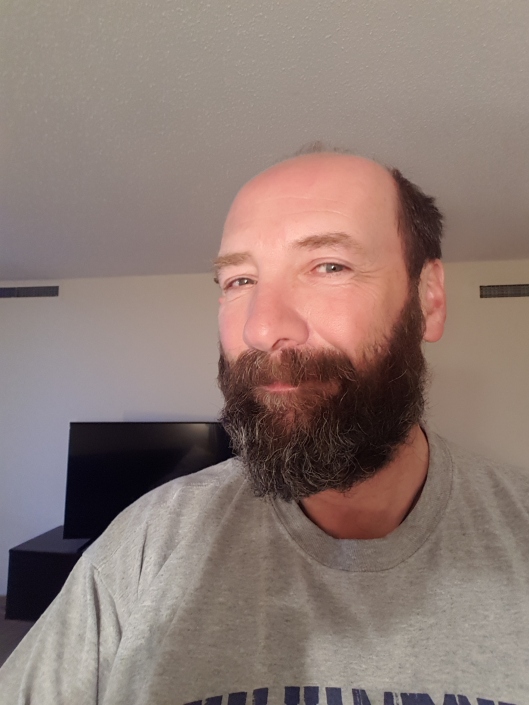 The end result was pleasing, even if my cheeks were feeling a bit chilly. 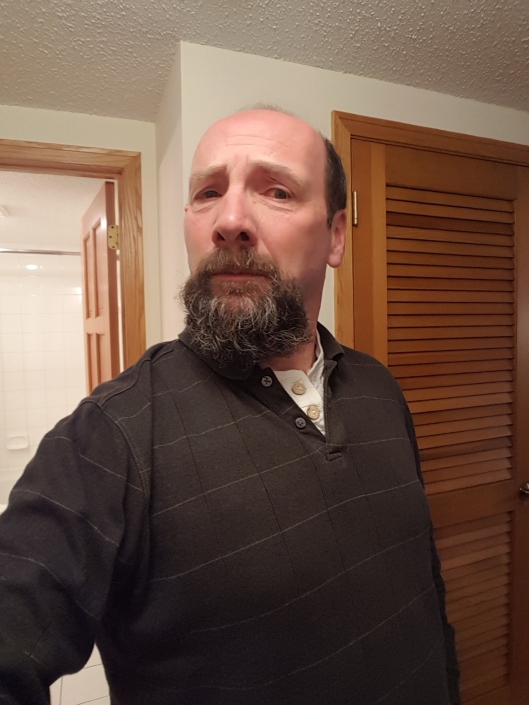 Being Sunday I wanted to continue a tradition from two years ago, when Liz and I (and latterly my brother Ian and I) went for Sunday breakfast at a wonderful chrome and vinyl diner nearby.  On leaving the apartment I took a brief detour up two floors to 35.  There has been a notice in the lift about Zumba and Yoga classes held up there.  I wasn’t particularly keen to join in the classes but I was interested to see the space, and I found a wonderful open-plan lounge, presumably used for functions (as well as Yoga and Zumba).  To me it screamed out ‘REHEARSAL SPACE’ and as I wanted to run through the entire show later in the morning, I was delighted to have found it.

There was a door out to a roof-top terrace which gave me a beautiful early morning view of Minneapolis.

And now, breakfast:  I walked with a Dickensian spring in my step past the Wesley Center and onto Nicolett Avenue, where I stopped for a moment outside The Music Box Theater where we played in 2015.

The Nicolett Diner was quiet and I was warmly welcomed and shown to a booth, where I had a wonderful all-American breakfast. This really is a once-a-week thing, otherwise I will never fit into any of my costumes.

Breakfast (note the script on the table – always working!)

I returned to the apartment ready to rehearse, but to my dismay discovered that my rehearsal room had been locked up.  There was nothing for it but to return to my apartment and move the furniture around, to make an approximation of the set: the sofa became the window box, the coffee table the pouffe, two chairs represented the chaise longue and an arm chair took the role of, well, an armchair. 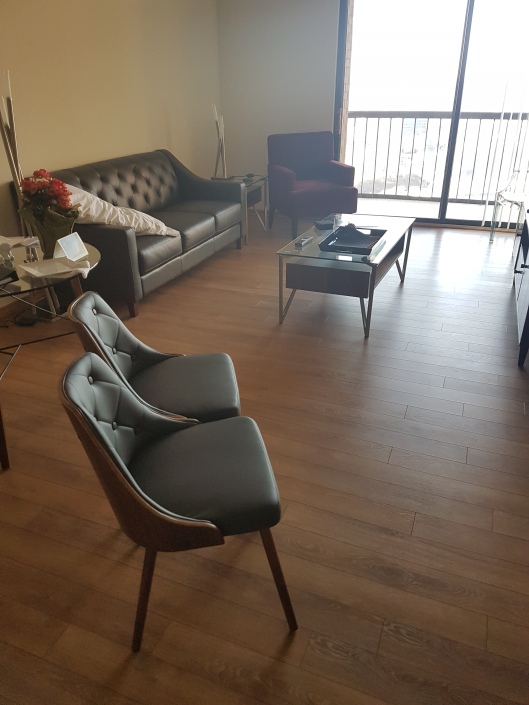 It was a very useful exercise, and I was able to go over and over some lines that caught me out yesterday, as well as fixing the new blocking into my mind.  There are three very similar lines during the show over which I always get mixed up: ‘was Swinburne looking for truth and guidance?’, ‘What if it’s lessons of redemption and grace were delivered by a black-clad martinet….’ And ‘it will reveal grace and hope and announce redemption.’  All of those truths, graces, hopes and redemptions have been getting very muddled and in the pressure of performing each of the scenes I have just been coming out with whichever combination happened to spring into my mind on the spur of the moment.  I spent a lot of time on those.

My unofficial run-through went very well and I was confident that I had overcome some of the frailties of yesterday.  At 1 I had a bowl of chicken noodle soup and was ready to rehearse for real at 2.

In the Wesley Center the congregation from the service was slowly leaving as we rapidly moved in.  For the first time we were using the large window frames that shape the back of the set, and this would be extremely useful as it would mean I had an idea as to the space I will have to work with over the next few weeks.

We were slightly pushed for time as another congregation was coming in at 4, so as soon as everything was assembled Jeffrey said ‘Go’ and I went.

The run today was so much better than yesterday’s and I really began to feel at home in my new surroundings.  My morning’s efforts had paid off and the performance was much more accurate and slick.  Both Dennis and Jeffrey move around the auditorium during the run, testing sight-lines and volume.

On cutting the show Dennis had asked for a run-time of 90 minutes, and I stopped the clock at 89, so everybody was pleased about that.  There were still issues that will need fixing, such as the long transition between scenes 3 and 4, which is not right yet.  This is where the original interval fell, and matters are complicated by needing a costume change, as well distributing various props around the stage: this is maybe where a degree of re-writing is needed.

As time was marching on and as had to leave the sanctuary to the new congregation we all decamped upstairs to Dennis’s office for notes and a debrief.

Jeffrey ran through his comments, which tended to be very small tweaks here and there ‘lose the comma in that sentence’, ’ move a titch earlier downstage’ and ‘we need to work out where to put the cane’.  Dennis chimed in with a few notes also, mainly about the text, but the greatest news is that there was no problem with volume and clarity in the domed room, so the tech team will not need to mic me, which brought a sigh of relief from around the table.

The largest part of the discussion was the sound effect issue and exactly how and where to use them.  Dennis has a very firm idea as to what he wants, but hasn’t yet heard it.  Jeffrey stood up for his role as a playwright saying that if a scene needed something artificial in it, then he hadn’t done a good enough job with the words!

There was a slight stand-off and it was agreed that the next rehearsal would concentrate on this issue.  Our composer Michael was sat taking this all in, and I am sure he will come up with a soundscape that suits everyone and that will enhance, rather than detract, the show.

Our meeting over I had just enough time to return to apartment and heat up the remains of my Bolognese sauce, before it was time to meet Jeffrey again, as he had very kindly invited me to the theatre.

The largest theatre in Minneapolis is The Guthrie, and they are currently performing King Lear.  We drove out towards St Anthony’s Falls, which was the starting point of the entire city as clever engineers realised that they could harness the water power to drive mills and factories.

The current Guthrie is a relatively new building and is immensely impressive.  From a cavernous lobby space long escalators take the audience up to a bar, and from there into circular corridors to the auditorium itself where a huge stage thrusts deep into the audience.

The show was impressive, although my continual 2.30 mornings meant that a few blinks lasted for rather longer than they should.  The storm was wonderfully staged, with music and sound (can we learn something from this?), as was the gouging of Gloucester’s eyes with Regan joining in the fun, using her stiletto heel for extra leverage.

When the show was done Jeffrey asked if we could just say hello to a few people, and we headed to the bar.  The arts scene in Minneapolis is very close and everyone knows everyone.  There were lots of congratulations and hugs and catchings up and anecdotes.  Drinks were bought and general conviviality descended.

As the evening went on I found myself sat at a table with our lighting designer Michael and his wife as well as with James Williams who played Gloucester (fortunately not occularly-challenged any longer), and Stephen Yoakam – Lear himself, who seemed to have recovered his sanity.

It was getting late when suddenly the conversation veered towards 1960s sports cars: Stephen owns a Mustang, as does Jeffrey (’66 and ’67 respectively).  Michael loves his cars and I used to own a 1973 Lotus Elan.  Stephen’s eyes lit up at my mention of  Lotus, as he used to live in Indianapolis and watched Jimmy Clark and Graham hill race there in the 60s.

An hour earlier I had been watching this man becoming increasingly mad, and moaning like a wounded animal as he carried the corpse of Cordelia to the stage; and now here we were chatting about engine sizes, manual transmissions and the sea change from front-engine to rear-engine race cars.  Very odd but great great fun.

Close on to midnight we said our goodbyes and Jeffrey took me back to my apartment block, where I thanked him for treating me to a wonderful evening.

As I turned all of the lights out and got ready for bed one thought occurred to me:  ‘if I wake up at 2.30, I will NOT be happy!’